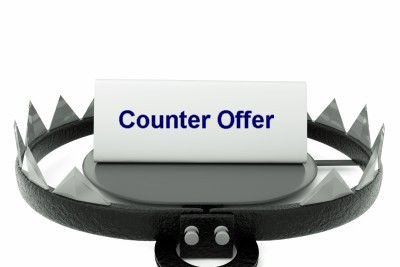 By guest writer Nelson Sebati, Entrepreneur and Non-Executive Chairman at Murason Business Services. He has 10 years’ experience in recruitment, talent acquisition, career transitioning & on-boarding, with a specific focus on IT and Executive skills. He is a certified Career Strategist and Job Search Coach. He studied Entrepreneurship at Wits Business School, Law at UNISA among other numerous qualifications & is currently a member of the YBSA, BMF, REC-UK, APSO, CSSA, ASA, and IoDSA.

It is counterintuitive, but counter-offers are almost always counterproductive for your career. I’m not talking about the give-and-take involved in a salary negotiation. I mean the kind of counter-offer you might get when you announce you are resigning to take another job. Sure, it’s an ego boost, but a backhanded one when you think about it. If you were so valuable all along, how come you had to quit to get your employer to recognize it? The simple answer is that most companies don’t have to be proactive in this post-recession labour market. They can coast because the demand for talent isn’t that hot and there are lots of unemployed professionals out there. No need to spend extra money unless the company is forced to do it. That must be the case because they have made you a counter-offer.

It looks like you are in the driver’s seat now, but you are not.  You just think you are.

What’s Wrong with This Picture?

If you take a counter-offer and then kick back, it’s likely that you will be kicked out. The reason that most companies make counter-offers is so that they rather than you are in control of the timetable for transition.  When someone resigns, the general rule is a 30 days’ notice period (or longer for those in senior management roles.) That means the company has got to scramble to find a substitute for the mission-critical role you have been filling. The odds are, it’s going to take longer than that to find a candidate who is going to be a good fit, that’s why they will give you more to stay around.  While you’re basking in the satisfaction of getting more money and/or a better title, your boss is reviewing resumes and taking his/her time to interview replacements. When she finds that special someone, you’ll be history.  It’s a nasty surprise for the unaware.

What The Worst That Can Happen?

You might think that being eliminated would be the worst thing that can happen if you take a counter-offer, but you would be wrong.  The worst thing is that you stay and are from now on untrustworthy, disloyal or an extortionist. It depends on the way your boss shades your actions. The end result is, no matter how you behave in the future, you will always be regarded with suspicion. You have already shown that you are ready to leave, so management will be waiting for you to do it again.  You will be at the bottom of the list for promotions and good assignments. Training?  Hah!!  Why would a company invest in someone whose longevity is questionable? You’ll also be subject to some “Me Too” fears.  No matter how discreetly the counter-offer situation is handled, there is always the possibility that the news will leak out.  Don’t be surprised if you are increasingly cut off from certain meetings.  Management doesn’t want your peers to get the idea that they can wring some more out of the company by copying you.

Want to super-size that?

Before you grab a counter-offer, it is important to think about what is being offered and what actually brought you to the point of leaving in the first place. A counter-offer is almost always about money.  The reasons people leave are almost never about money alone. The reasons people leave are money and something else or more commonly, something else and maybe money too. Where is the something else in this counter-offer? An extra few thousand rands per year doesn’t change the 60-hour work week and insane deadlines.  It doesn’t release you from the boss who doesn’t make decisions and lack of upward mobility. It doesn’t shorten your killer commute. You won’t have to wait for the glow to wear off to be back where you started because you never left. How long will it be until you are job hunting again?  It doesn’t matter whether they let you go or you let them go. The stress of the search will be the same and you won’t have as much energy for the hunt the next time around.  If you pass on the job offer in your hand right now, what is the cost of finding the next one?  Will you have to pay sooner or later?

Yes, I know what if the new job doesn’t work out? What if it is no better than the job you are leaving? Better the devil you know than the devil you don’t know, right? Wrong! Who knows? It is just as likely to be a good change as a bad change. At first, it may be hard to tell which the safer alternative was and which the sorry one was. Over time you will get some perspective and even if it’s not for the better for the first months at least it is different. You will have the opportunity to look back at your old situation and decide whether it was really as bad as you thought while you were there. Your former employer gets the same opportunity, assuming that you handled your exit gracefully. A respectful refusal to a counter-offer can leave the door open for an eventual return. All parties can benefit from a hiatus. I’ve heard from lots of people who have left employers and then come back. These days, it’s very acceptable to leave and return later with a higher profile. The skills and experiences you gain with another company can make you more valuable than if you had stayed. Plus, you have a better negotiating position, knowing what the culture and environment of your former company were. You may be able to bargain for better working conditions or a more favorable reporting structure in addition to the compensation and title you want.

But first you have to handle your exit properly. It is a delicate process to extract yourself with your reputation and relationships intact when a counter-offer is on the table.  Regardless of whether you intend to return, you do want to preserve the company’s respect for you. That means you take the time to consider their proposal, even if you have no intention of taking it.  No matter how cheesy that offer is, make it look like you have to sleep on it.  Tell the manager who offers the deal that you will need a day or two to think it over.

Use that time to plan your response.  You will need to be gracious, definite and concise. Say something like this:

“Dear Name of Manager, I really appreciate this offer.  It is gratifying to know that Name of Company values me so highly. I feel the same about my experience here, but this other position is an opportunity that I just can’t pass up.  I’m sad to be leaving all my colleagues here, but this is the right time for the right next step in my career. How can we use the 30 days before I leave in the most productive way?  I have jotted down some ideas and thought that we should get together to plan, maybe later today or tomorrow.  I want to be as helpful as I can be during this change.”

Don’t get caught up in a discussion of where you are going and what makes this opportunity so much better than your current job. Politely refuse to discuss it by saying that you want to focus on an orderly transition.  Keep saying it, if you have to, until you make your point.

After you have rejected a counter-offer, another one may come your way. Your manager may propose a short-term extension for your exit date. If you are willing and the start date for your new job is flexible this may be a good way to offset any residual bad feeling. If you agree to this be sure to set down in writing what the conditions of this extension are. It may be an amendment to your original resignation notice (which also should be in writing) or a separate document.  It should contain the dates and details for the extension, including work hours, compensation and responsibilities.  It is really a mini-contract, so be sure to get it signed by the manager before you go ahead with it.

As attractive as counter-offers may appear, they greatly decrease your chances of achieving your career potential and to keep things in perspective read the list below:

#1.   What type of company do you work for if you have to threaten to resign before they give you fair market value for your skills?

#2.   Where is the money for the counter offer coming from? Is it your next raise early? (All companies have strict wage and salary guidelines which must be followed).

#3.   Your company will start looking for a new person at a lower salary price, immediately.  The wheels are in motion to replace you, ASAP.

#4.   You have now made your employer aware that you are unhappy.  From this day on, your loyalty will always be in question.

#5.   When promotion time comes around your employer will remember who was loyal and who wasn’t.

#6.   When times get tough your employer will begin the cutback with you.

#7.   The same circumstances that now cause you to consider a change will repeat themselves in the future, even if you accept a counter offer.

#8.   Statistics show that if you accept a counter offer, the probability of voluntarily leaving in six months or being let go within one year is extremely high. National statistics indicate that 89% of employees that accept counter offers leave within in 6 months.

#9.   Accepting a counter offer should be an insult to your intelligence and a blow to your personal pride, because you know that you were bought.

#10.  Once the word gets out the relationship that you now enjoy with your co-workers will never be the same.  You risk losing peer group acceptance and will forever be that defector who was brought back.

To ease the stress of resisting the allure of the counter-offer, stay in close touch with your Job Search Coach or Career Strategist from the time you resign until you are actually out the door.